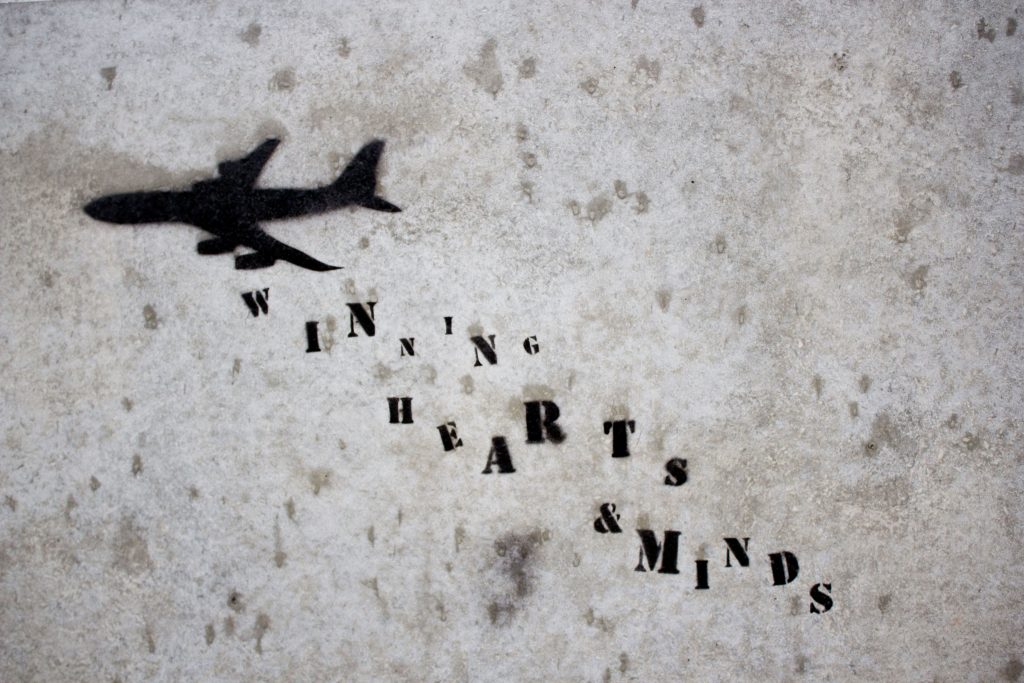 War zones are as instructive as they are destructive. Since Vietnam, they have beautifully illustrated the contradiction between capitalism and democracy. They teach the lesson that (false) democracy is an alibi for the good intentions of capitalist intervention even in the face of wanton destruction and appropriation. Whether it was the Thieu government in Vietnam or the Karzai government in Afghanistan, this lesson never changes. The establishment of global democracy has never been a goal of global capital. Its preference is for an authoritarian plutocracy that can be labeled a democracy. This is why the psy-ops principle of “winning hearts and minds” could simultaneously exist with the military strategy of “search and destroy.” Now that winning hearts and minds is not just US policy, but NATO policy, we can see it at work in every conflict in which NATO members have a stake; in every case, the idea of winning over the people through the alleged establishment of democratic institutions never has to be reconciled with unprovoked invasion, house-to-house searches, assassinations, torture, or drone attacks. Yet, even in these brutally conflicted environments, resistance is still possible, and positive new arrangements for living, activist networks, and even infrastructural changes can and have been built. 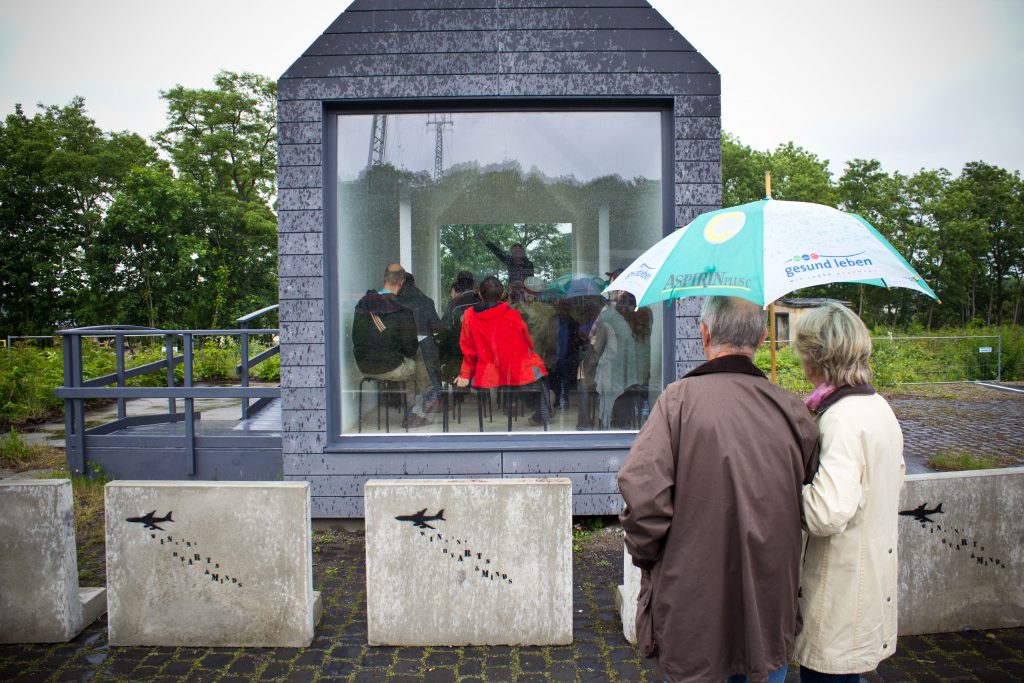 Opening Day. CAE introduces the concept of the space.

Cultural institutions in capitalist nations reflect this same disturbing set of contradictions and relationships. In the field of visual arts, museums tend toward a support of plutocracy through collection building and maintaining the value of collections by functioning as a parallel track to the art market. Institutes, Kunsthalles, and major festivals function as corporate alibis for good cultural citizenship, and too often function within the frame of research and development of cultural products in the service of profit and enterprise. At the same time, these institutions have their democratic side, which usually appears in the form of community outreach, public programming, or education programs. These programs are generally the most impoverished, but are staffed by those who genuinely want to create events promoting social change (and are willing to accept poverty as a given condition to do it). This blend of having few resources together with a strong sense of volunteerism leads to the development of low-cost public events that are subsidized by the free labor of those who create them. Or to put it another way, the poor subsidize the creation of a false alibi that signifies the beneficence of plutocracy. And yet, on an immediate person-to-person level, the results of such performances, exhibitions, and events can be inspiring and culturally valuable. 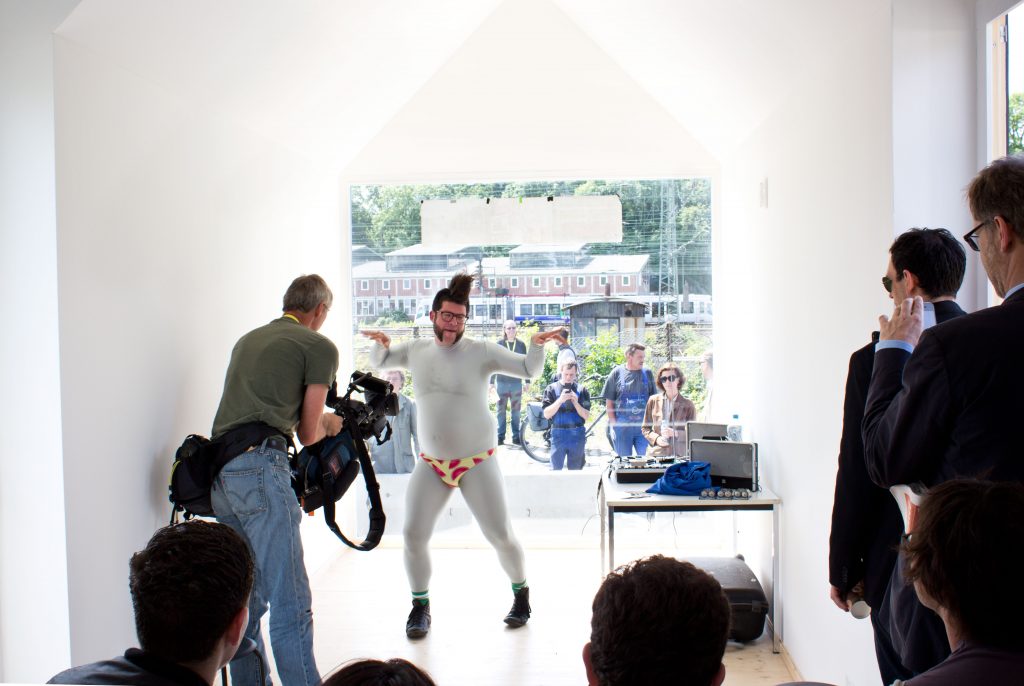 This is the contradiction that CAE wanted to perform at dOCUMENTA (13) (d13) in Winning Hearts and Minds. d13 is a nondemocratic, curatorially based destination festival that is supposed to function as a momentary snapshot of the global state of contemporary art. In addition, it also has its education and community outreach programs that are not so well funded, but do much better than most. Within this context and, more to the point, the general systemic one described above, CAE created a cultural space that was totally impoverished: a small space (3×10 meters) with a minimal amount of furniture, no climate control, and located on the very margins of the festival (a location we chose). d13 offered to equip it with whatever technology we wanted, but we declined. We had no budget for artist fees, travel, or installation support, although d13 provided free maintenance of the space itself. Two weeks before the festival started, we issued a call for proposals to use the space for one hour each day at noon; there would be one hundred lunchtime events over the one hundred days. Proposals poured in from around the world. Even though we told those who applied that there was no financial support, and even worse, that they would have to bring all their own equipment, the program filled in a matter of weeks. Most of the events we chose were not curatorially viable (which is not to say we didn’t think they were good projects). As usual, the poor and the marginal were subsidizing the wealthy with free programming. 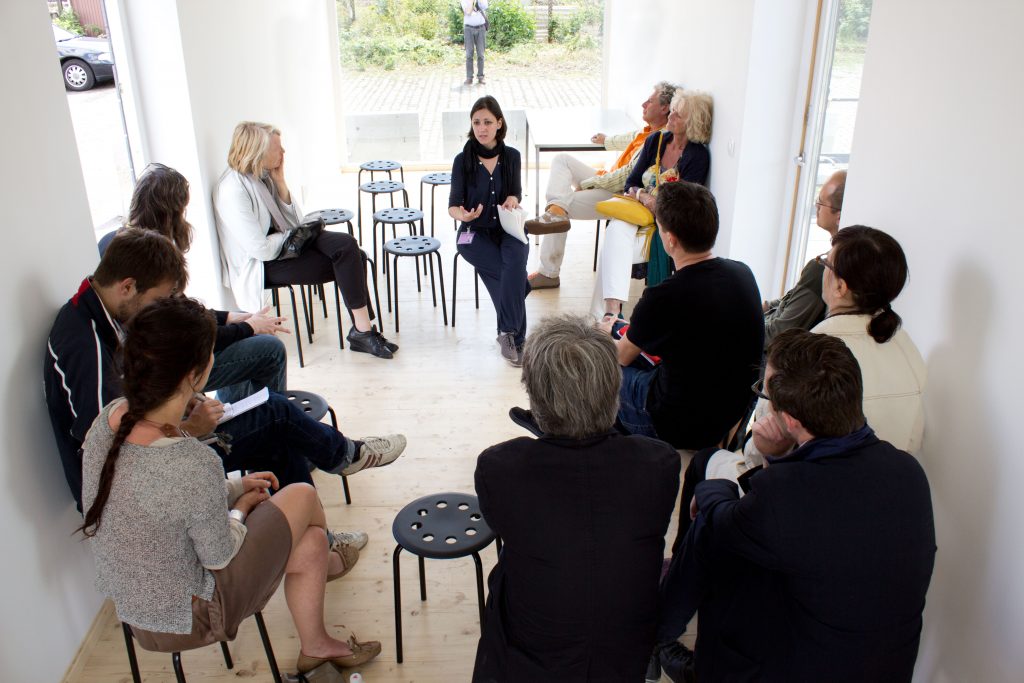 Rossella Biscotti reads from the transcripts from the Antonio Negri trial.

At the same time, we lived the other half of the contradiction. We wanted these projects to succeed. We wanted to give these artists and critics a real platform at d13. We wanted to show how compelling open public programming could be. (Our inspiration here was New York City public-access television in the early 90s, which to our minds is the most successful experiment in open-access programming to date.) On the ground, these events appeared successful, for the artists producing them and for the audiences who discovered them. We hoped to call attention to the razor-thin line between being exploited while at the same time not feeling exploited. This project was a tribute to the power of affect, and how it is used simultaneously for both exploitive and resistant purposes. 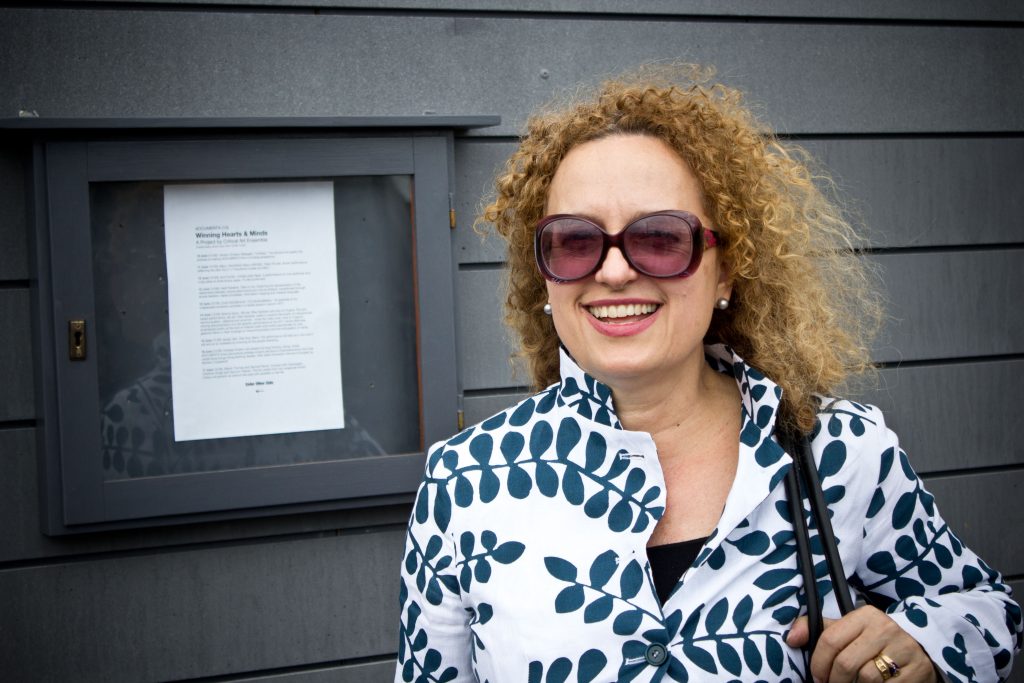 Carolyn Cristov-Bakargiev after lecturing on funding and fundraising for dOCUMENTA 13. The video of this lecture has been sealed, placed in the dOCUMENTA archive, and will be available to the public in June 2022.