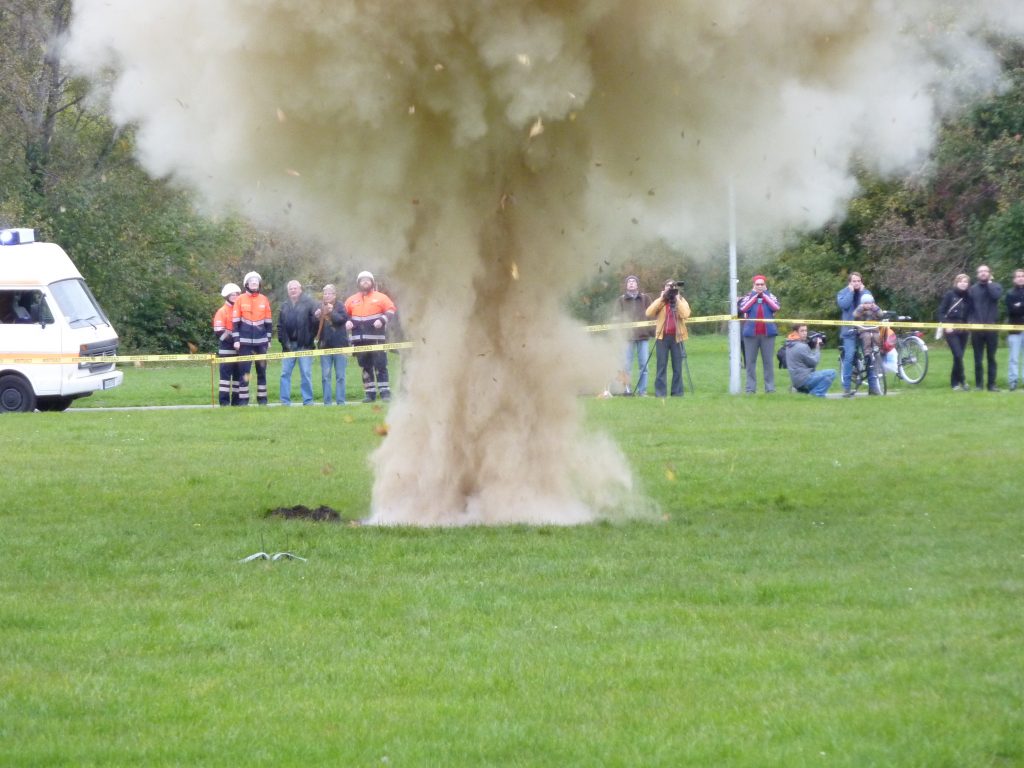 CAE sets off a mock “dirty bomb” in a public park in Halle, Germany.

CAE’s project is about the use of the so-called “dirty bomb” as an instrument for state propaganda. We intend to recreate the hype around this instrument while at the same time deflating the spectacle. With the help of some great curators/producers in Germany, we will hire a professional demolition team to safely set off a bomb with a non-radioactive, metallic tracer simulant in an urban area in Germany. We’ll have people in Hazmat suits with metal detectors analyze the blast site. Immediately after the blast and while the site is being analyzed, we will set up a PA system at ground zero where a nuclear scientist will speak to the public about the actuality of making, deploying, and detonating a dirty bomb. The reality is that weapon is basically a myth. For a truly harmful one to be built it would require state sponsorship. It not something any terrorist could ever do, nor is it a “poor man’s nuke.” If we don’t take the “dirty bomb” as a self evident threat (its propaganda form), and instead look at it from a reflective reasoned position, it’s easy to understand that there is nothing to fear, and that the state is using this image for other more nefarious purposes. 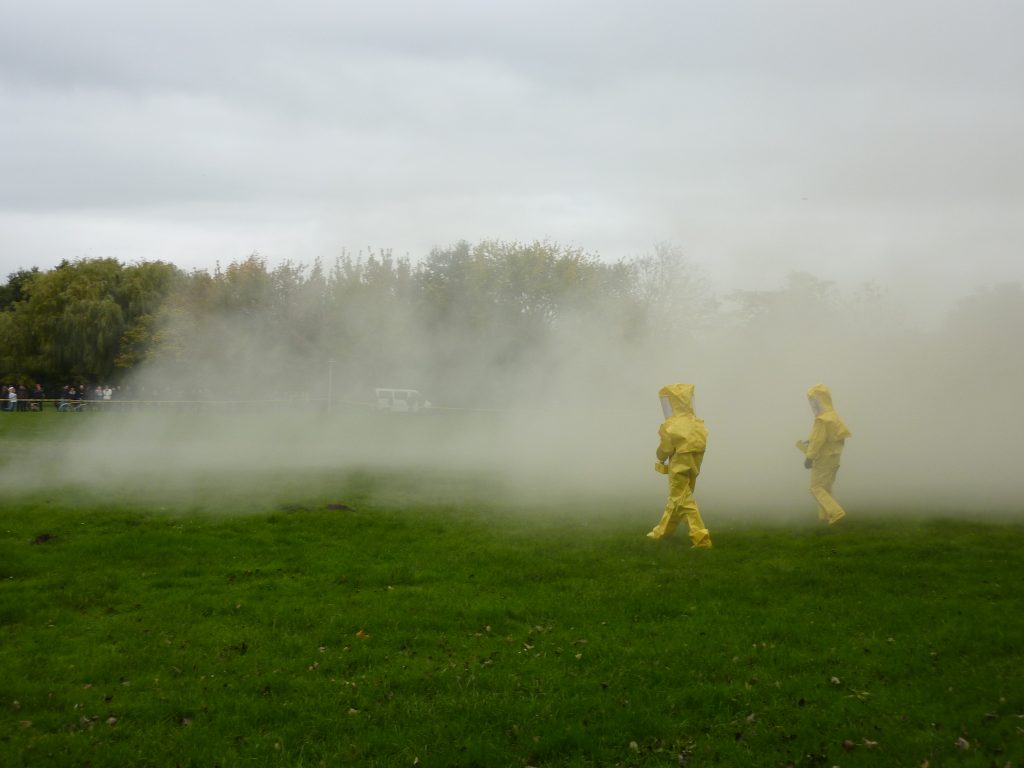 CAE members move onto the field to mark the trajectory and coverage of the dust.

Every decade seems to have a weapon around which mythic narratives are constructed about the state of the world, the legitimacy and illegitimacy of violence, and people’s relationship to security. Sometimes these weapons have a referent, and other times they exist only as an idea planted in the mind of the population. Usually their material function is not important. What is significant is the capacity of the idea to represent as self-evident vast amounts of dominant, conservative ideology.

In the West, two fundamental forms of political narrative have developed over the past thirty-five years—one representing neoliberal positions and one representing neofascist positions. Most prevalent in the ‘80s and ‘90s was the neoliberal myth of military violence. To the neoliberals, a culturally iconic weapon should function to soothe the public. It should make people feel that they are safe in their homes, that their investments are secure, and that the world is basically a stable place. The weapon should be defensive, and it should outshine any weapons systems designed for offensive aggression. The weapon should be produced in the West in order to demonstrate technical leadership as well as the unwillingness of western nations to intervene in the economies or the governments of other nations. If hyped correctly, the icon should gently convey a benign paternalism that citizens will be pleased to follow. Examples are any of the many “shield” technologies or the patriot missile that allegedly protected Israel from Iraqi SCUDs in Gulf War I. 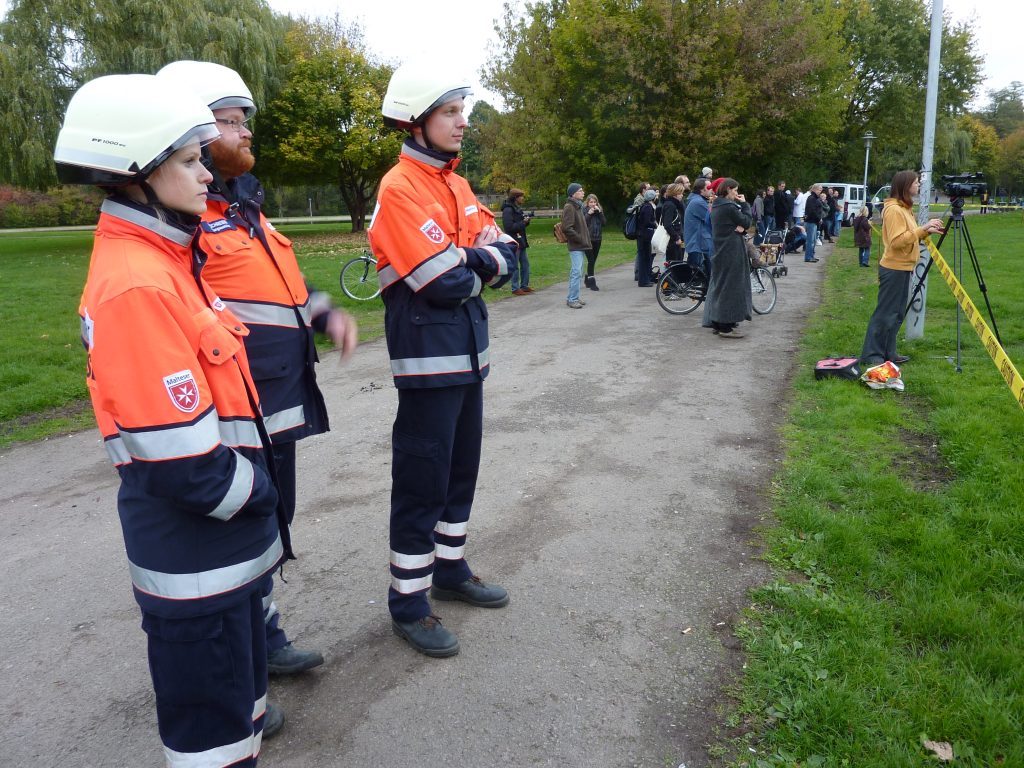 The general audience, police and other emergency personnel prepare for the blast.

The second narrative form was successfully deployed by rival neofascists (although it had been around since the mid ‘70s in the US) and stood very much in contrast to the neoliberal one. To this group, a culturally iconic weapon should function to alarm and scare the public. It should represent a world that is unstable and conflicted—a place where neither person nor property is safe without the use of all available military assets. This weapon should be offensive, and it should confound any western defensive weapon system. It should be produced by people of “other” religions and ethnicities or inside western countries by foreign agents. It should demonstrate the powerful desire of the “jealous” and the “hateful” to intervene in the civilized western way of life—a force which cannot be stopped without an extraordinary restructuring of government, civil society, and foreign relations. Hyped correctly, it should produce in the public a desire for strong, unyielding, all-powerful leadership that cannot be questioned and that is empowered to do the necessary restructuring.

CAE would like to focus on the latter narrative, and on one of the main weapons of fear in the propaganda arsenal of western states, which is now embraced by the neoliberals as well: the “dirty bomb.” 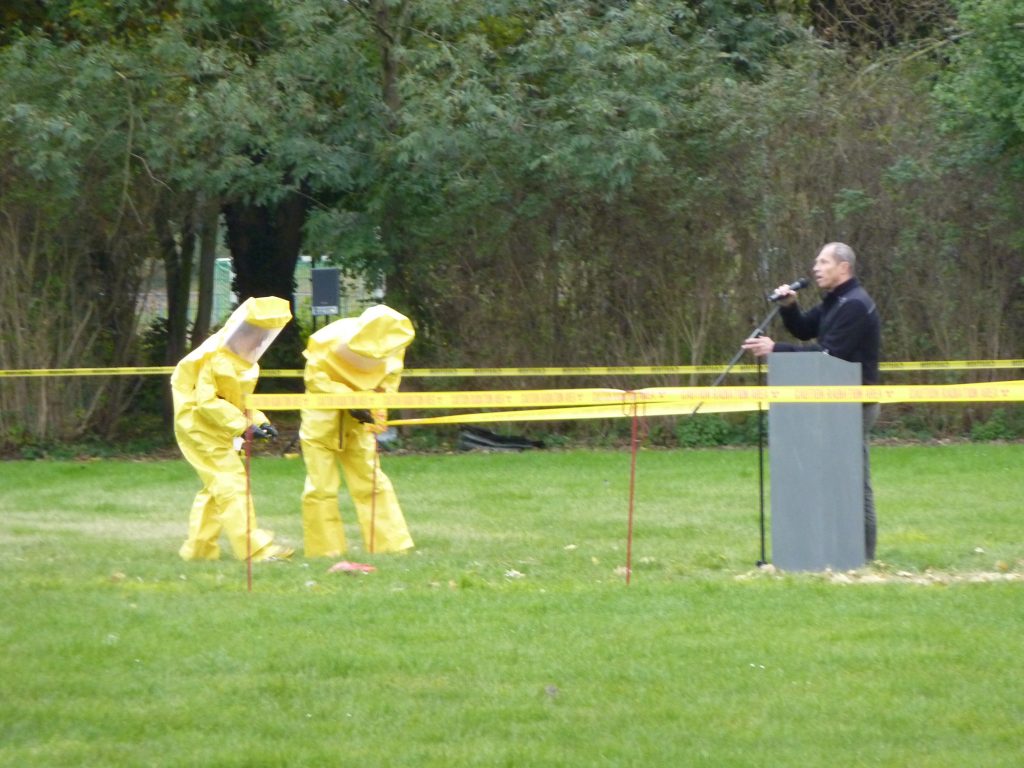 A nuclear physicist proceeds to ground zero and explains why the probability of this actually happening is near zero as CAE members continue to tape off the “contaminated” areas.

Background on the Dirty Bomb (or Radiological Dispersive Device)

The dirty bomb is a near perfect propaganda weapon to produce fear. First, due to its connection to radioactivity it already has a deeply embedded cultural fear narrative that dates back to the 1950s. Thus radioactivity is genuinely frightening to anyone who has followed its Hollywood or military representations over the years. It scrambles DNA, and causes horrible flesh-melting deaths. Second, it appears to be such a plausible device: All one has to do is obtain some explosives and a radioactive substance, place them together in a suitcase, and detonate it in a dense urban area. The radioactive substance is blown throughout the city and everyone suffers radiation poisoning, or in time, cancer. Third, the materials are easy to acquire. Fourth, the bomb is portable and therefore impossible to stop. Finally, we are told, anyone with minimal training could make it. All these completely or mostly fictional characteristics appear self-evident given the cultural narratives surrounding it. In the US, for example, all it took to legitimize the dirty bomb was then Attorney General John Ashcroft’s claim that alleged enemy combatant Jose Padilla was “exploring a plan” to build such a bomb. The fantasy became entrenched in the great American imagination where it would grow, unquestioned, until it was the fear-producing juggernaut it is today.

[In fact, Padilla was never going to build a dirty bomb. Although the government’s claim that he might be planning to build one was used to justify his 3-year long illegal detention and torture, prosecutors never charged him with any plot involving a bomb, “dirty” or otherwise. The Department of Justice narrative about Padilla was as fictional as the bomb itself. Ashcroft was later reprimanded for it.]

To clear the air, and for the benefit of frightened people everywhere, the US Nuclear Regulatory Commission’s website states:

Most RDDs [Radiological Dispersal Devices] would not release enough radiation to kill people or cause severe illness— the conventional explosive itself would be more harmful to individuals than the radioactive material. However, depending on the scenario, an RDD explosion could cause fear and panic, contaminate property, and require potentially costly cleanup. Making prompt, accurate information available to the public could prevent the panic sought by terrorists.

[All said without irony.]

Manhattan Project nuclear scientist Theodore Rockwell has this to say:

[I]t is well documented by all our official agencies that the radioactivity in dirty bombs is unlikely to seriously hurt anyone. People not injured by the conventional explosion itself could walk away and be out of danger. If concerned about possible contamination, they could remove their clothes and take a shower.

CAE would like to begin the mission that is called for but never undertaken by the US NRC of reconstructing the symbolic order to better correlate with real material order. To accomplish this we would have a nuclear physicist speak about the extreme unlikelihood of a dirty bomb ever being used.

In order to begin this task we propose a temporary monument to public safety. The project has 2 key stages:

1) Simulation of the mythic scene

We would begin with critically examining the ideologically driven spectacle of the dirty bomb advanced by the Federation of American Scientists (FAS), by creating a simulation of their scenario of such an event. For obvious safety reasons, only trained, licensed and insured demolition experts must perform this part of the project in a secure location. In the FAS scenarios, the most plausible material that could possibly be stolen by a terrorist from industrial and medical sites is Cobalt 60. Instead of Cobalt 60, which comes in rod-form, we would use a harmless simulant such as rebar (steel reinforcing bar), and hire the demolition crew to safely perform the process of bomb construction (using dynamite as described in the FAS scenario) and detonation. This would not be a big blast; it would be just a small attaché case worth of explosives.

Professional aerial video and still photography would be used to document and map the explosion site. Tracking the steel simulant using metal detectors would also be used to produce the mapping. In consultation with experts in the field of Nuclear Physics, this mapping would serve as a basis for assessing the danger such a scenario would realistically pose, as well as the difficulty of clean up.

CAE also wants to note that this project will be self-terminating, and will leave the space in the same condition in which we found it. Nature will provide the forces for remediation.

2) Construction of the critical space

CAE would then create an “earthwork” that demonstrates the ease by which people in the blast area could move themselves to safety. We would mark the site with a controlled burn illustrating the gradation of risk, from scorching at ground zero, all the way to lighter burns as one moves away from the blast site.

Instead of a bomb site being a place of terror and death, we would transform it into a place where participants can perform calmness as they easily walk in, through, and out of the blast site. Hopefully, this interaction can help contribute to more reasoned discourse about the issues involved in the allocation of public resources for military and security purposes.

Moreover to emphasize the fiction of the dirty bomb, we will set up a PA system at ground zero where a nuclear scientist will speak to the public about the near impossibility of terrorists making, deploying, and detonating a dirty bomb.