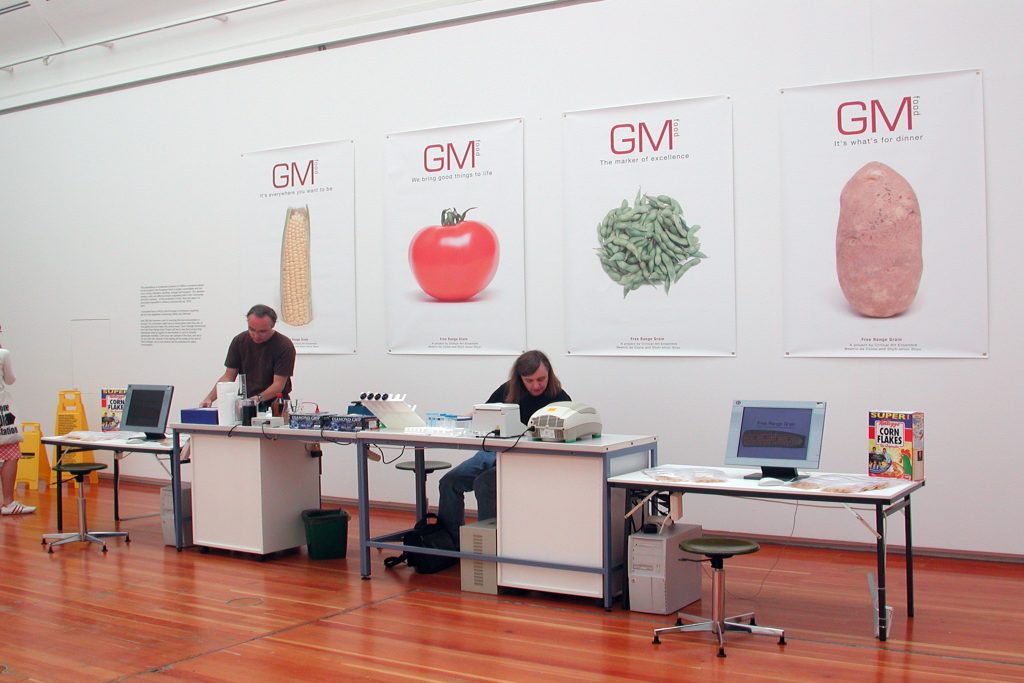 Installation view, Schirn Kunsthalle, Frankfurt, 2003 Free Range Grain is a live, performative, conceptual art project designed for a European audience. CAE’s first goal in this project is to examine the relationship between commodity and borders in a global economy. The EU is often perceived as both open and yet locked down (“Fortress Europe,” as it is often called). Our position is that the EU tends toward the global (smooth space). Since processed corn and soy products are being imported into Europe in large quantities, we are quite skeptical that the EU will be able to maintain its borders against the “contaminated” GM commodities.

Free Range Grain was a live, performative action that used basic molecular biology techniques to test for genetically modified (GM) food in the global food trade. CAE wanted this interventionist performance to demonstrate how the “smooth space” of global trade enables the very “contaminations” the authorities say it guards against. CAE/da Costa/Shyu constructed a portable, public lab to test foods for common genetic modifications. Members of the public brought us foods that they found suspect for whatever reason, and we tested them over a 72-hour period to see if their suspicions were justified.

Recently, the EU has passed fairly strict laws regarding the importing and labeling of GM foods in an effort to protect/inform a concerned public about the origin and manufacture of the food on the market. Given these restrictions and the general aura of caution in regard to the consumption of genetically modified (GM) foods, Europe will need to maintain strong borders that can halt the freedom of movement given to food commodities. With the relatively heavy importation of grains and processed grains from the US, it appears to CAE/da Costa/Shyu that it will be very difficult to filter out GM foods. Not only are the protocols for product testing on a systematic basis different in intensity in every country, one has to also be suspicious about American ethical/legal resolve about volunteering information damaging to its profits. In the US, all the companies agree that labeling GM foods is not helpful to the public nor good for business. 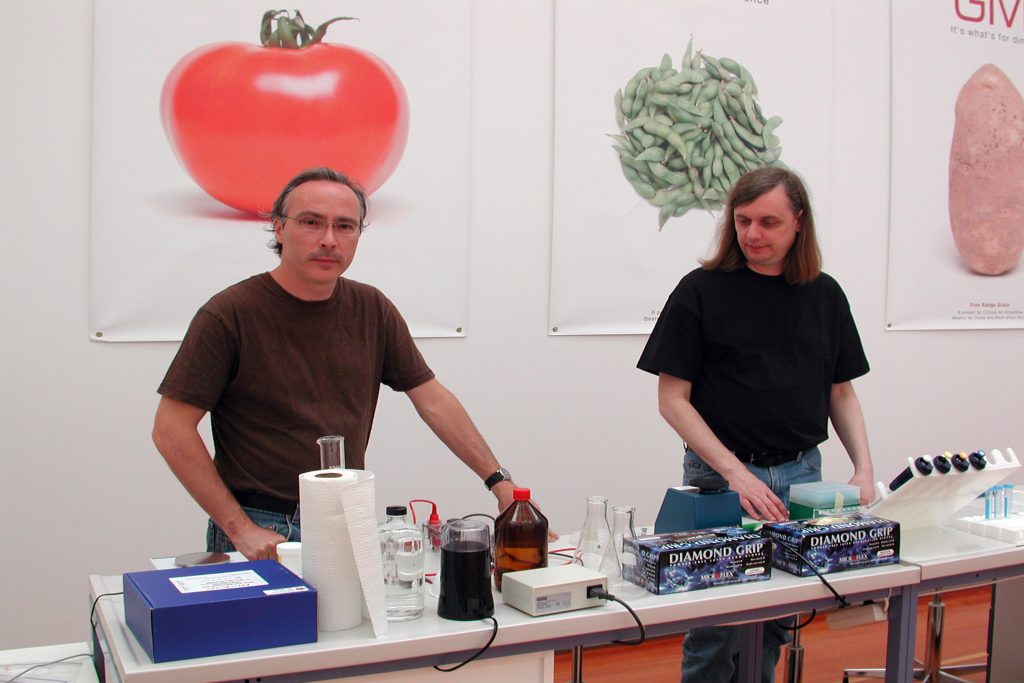 Schirn Kunsthalle, Frankfurt, 2003 Our second goal is to hurry the process of demystification. Biotechnology and the science behind it are some of the most misunderstood areas of production in the cultural landscape. Myths, fantasy, misleading speculation, and disinformation abound in the public sphere. Part of the reason for this is that the scientific process never makes a public appearance, only the miraculous products. We want to bring the routinized processes of science to the public—let them be seen and touched.

What CAE/da Costa/Shyu see in this particular example of GM food distribution is a means to visualize the material reality of theories of global trade. On the one hand, there is the global economy of smooth space, where the commodity moves relatively freely. On the other hand, there is a belief that markets can be locked down by using traditional forms of blockage typically used to preserve or strengthen nation-state economies. The EU is often perceived both as open (a major architect in the development of open markets and free trade as well as producers of global consensus) and yet locked down (Fortress Europe). Our belief, however impressionistic, is that the EU tends toward the global (smooth space). Since processed corn and soy products are being imported into Europe in large quantities, we are quite skeptical that the EU will be able to maintain its borders against such contaminated commodities.

Free Range Grain is a live, performative action. CAE/da Costa/Shyu has constructed a portable, public lab to test foods for the more common genetic modifications. People bring us foods that they find suspect for whatever reason, and we test them over a 72-hour period to see if their suspicions are justified. While we will not be able to say conclusively that a given food is genetically modified (although we can offer strong probability as whether it is), we can test for conclusive negatives, and we can bring issues of food purity into the realm of public discourse. Identified contaminated food will be offered for consumption at your own risk. If on the other hand, if we find nothing, it lends credibility to the idea that the European food chain is safe from GM contaminants.

This project also has a second layer in examining the real conditions of bioproduction. Biotechnology and the science behind it have to be one of the most misunderstood areas of production in the cultural landscape. Myths, fantasy, misleading speculation, disinformation, and so on abound in the public sphere. Part of the reason for this state of communicative disorder is that the scientific process never makes a public appearance, only the miracle products as commodity fetish. We want to bring the routinized processes of science to the public let them see them and act within them. Especially compelling in witnessing and participating in these processes of production is the realization that nonscientists could use much of this technology if they had the desire to do so, and that many of these processes do not require a tremendous amount of education to understand. In other words, the nonspecialist public does not have to leave the manufacture of the discourse and policies surrounding issues of biotechnology to the experts. In executing projects such as this one, we hope to contribute to an idea of public science by focusing on issues (such as food production) that are of direct interest to people, and so contribute to making the meaning of scientific initiatives immediate and concrete, as opposed to the vague abstractions they tend to be. 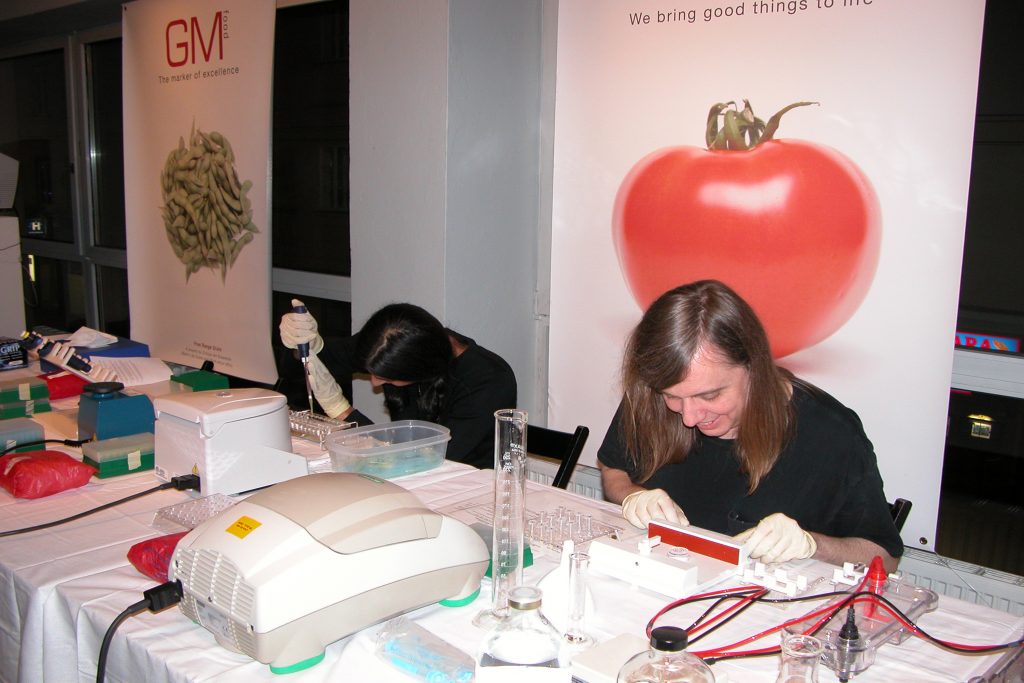 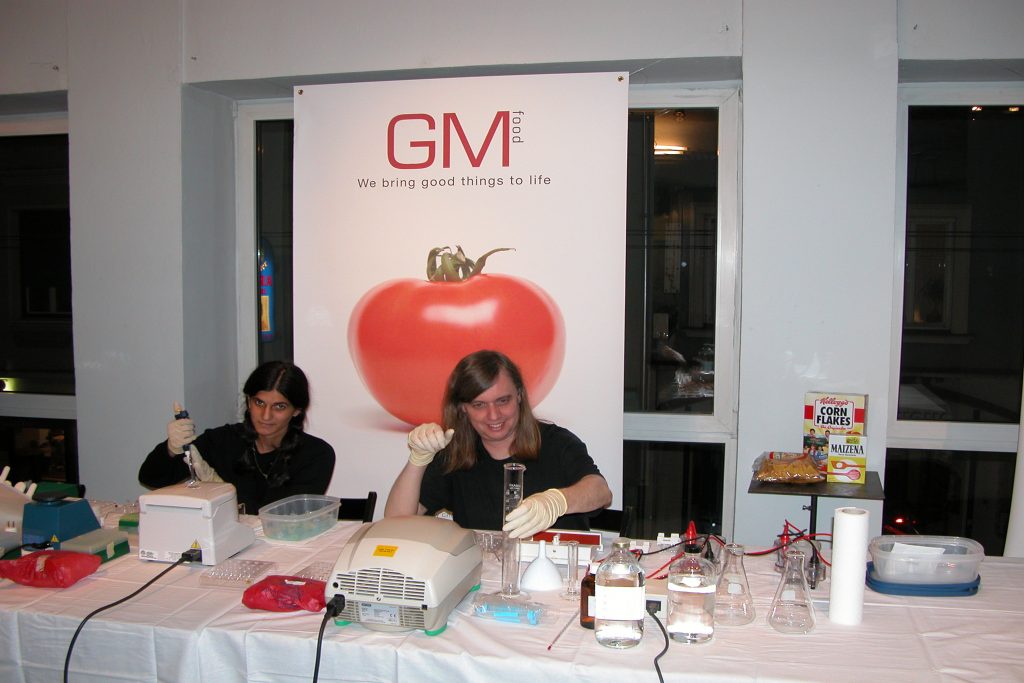