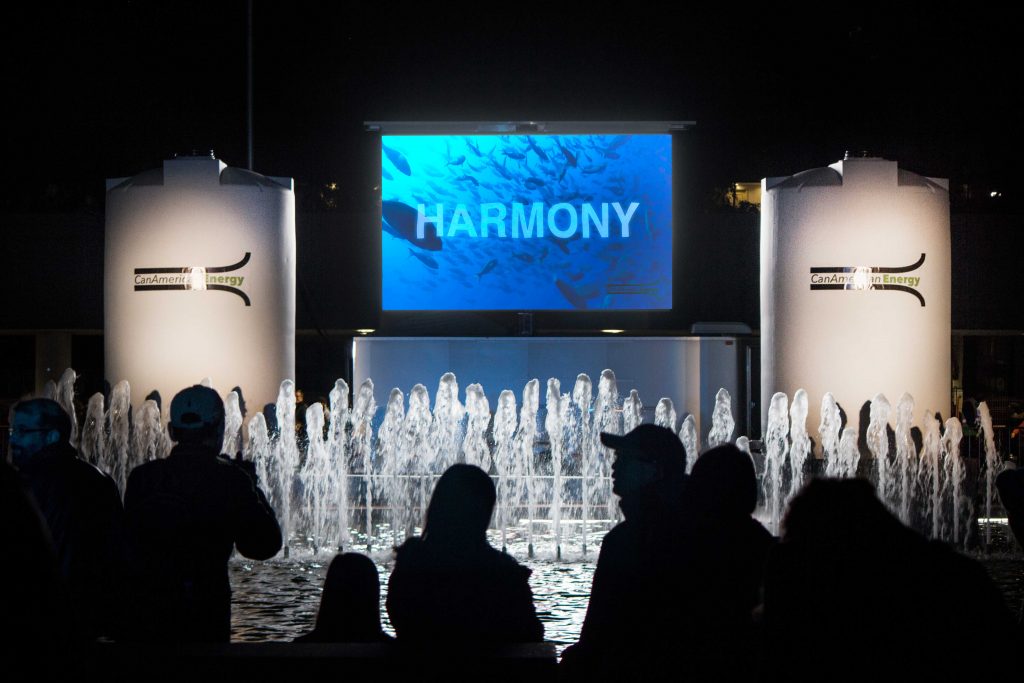 In Nathan Philips Square (at Toronto City Hall), CAE created a monument that contrasts corporate and environmentalist arguments regarding extraction industries. The dialogue begins with a piece of corporate art extolling the benefits of unregulated extraction.

As US artists coming to Toronto for an international cultural event, we want to create a project that will be meaningful to a diverse audience arriving from all over North America, Asia, and Europe. One issue that everyone has a stake in is the extraction, transportation, and distribution of energy resources—particularly the dominant forms (natural gas and oil). These resources cross every border, and are a critical part of every country’s international policy. However, unlike so many international relations, the interests of global citizens concerning energy do not diverge in accordance with national identity. Positioning in regard to these issues tends to break along the lines of value systems that favor a business model for resource management versus those that favor a green environmental model. This unresolved contradiction in contemporary global politics is the area CAE would like to explore with the international audience at Nuit Blanche through installation art and participatory performativity.

CAE will begin the project by building a monument to energy security. The current discourse by dominant political and economic interests in regard to energy management revolves around energy security (i.e., independence from Middle Eastern oil supplies), free North American trade, job creation through the expansion of energy production, and even the creation of a Canadian energy “super power.” (Since Toronto is the host city, we would like to make the project somewhat Canada-centric, but not so much that it would appear irrelevant to other nationalities.) A tremendous amount of wealth funds this overwhelmingly positive discourse. The favored cultural medium of wealth throughout history has been the monument, which enables its interests and point of view to appear in perpetuity as the consensus position.  For this reason, we want to start this project with a monument to represent this side of the energy discussion. The monument would consist of two large oil barrels connected by a pipeline to represent Canadian-American energy independence. The monument would be placed in the city hall fountain (the Gulf of Mexico) in front of the freedom arches (this placement should help with the management of the project when the crowds come to the square). Over the two barrels will be a large screen where messages on the importance of energy independence from the CEO of Can-American Energy will be delivered over the course of the night.

Once this infrastructure is in place, we can begin to add theatrical embellishments to represent the diversity of opinion on energy matters. We would begin with a breakdown in the pipeline causing an oil spill into the fountain. We would use an oil simulant that would be easier to clean up and safe to use. The spill should have formal qualities that will be quite beautiful, while at the same time allowing CAE to introduce a dissenting voice that will allow us to push the drama along in what is ultimately a theatrical work in keeping with the larger, curatorial theme of “Performance Anxiety.”  The second phase will be the arrival of environmentally friendly taggers who will message the tanks.

The final phase will be the arrival of a cleanup crew to get the oil out of the fountain, and disperse the crowd.. The people in the square can decide how they want to raise their voice, or not. In the end, we will be able to create through the gesture of the oil spill an open-script theatrical event that will function as a microcosm of the global energy macrocosm. 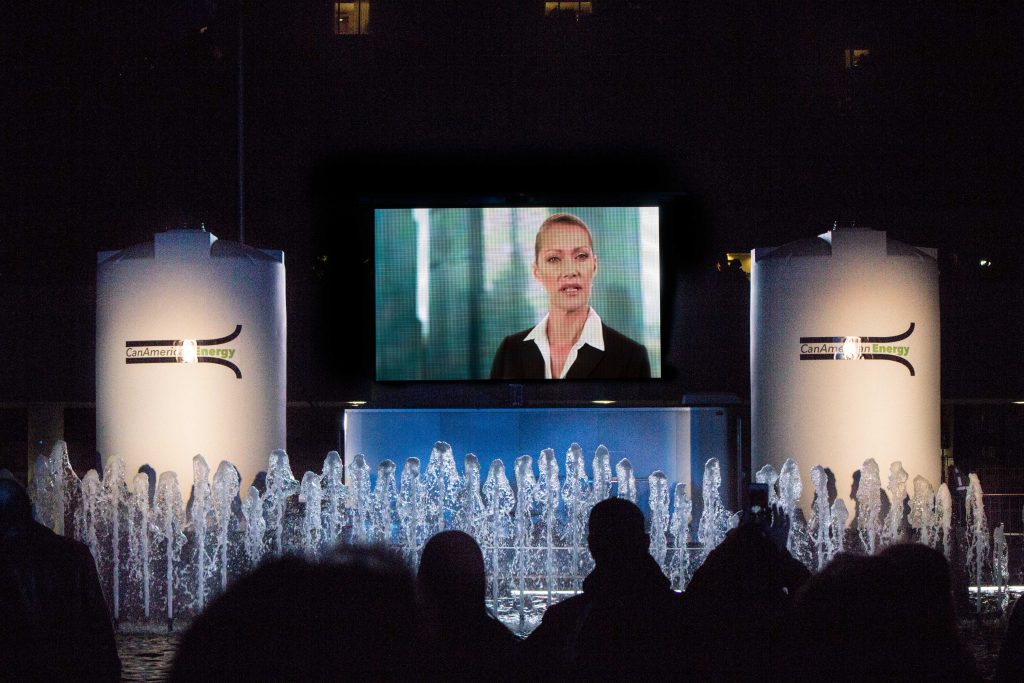 CanAmerican Energy Vice President for Public Relations makes her pitch for extraction, and the importance of corporate involvement in cultural events. 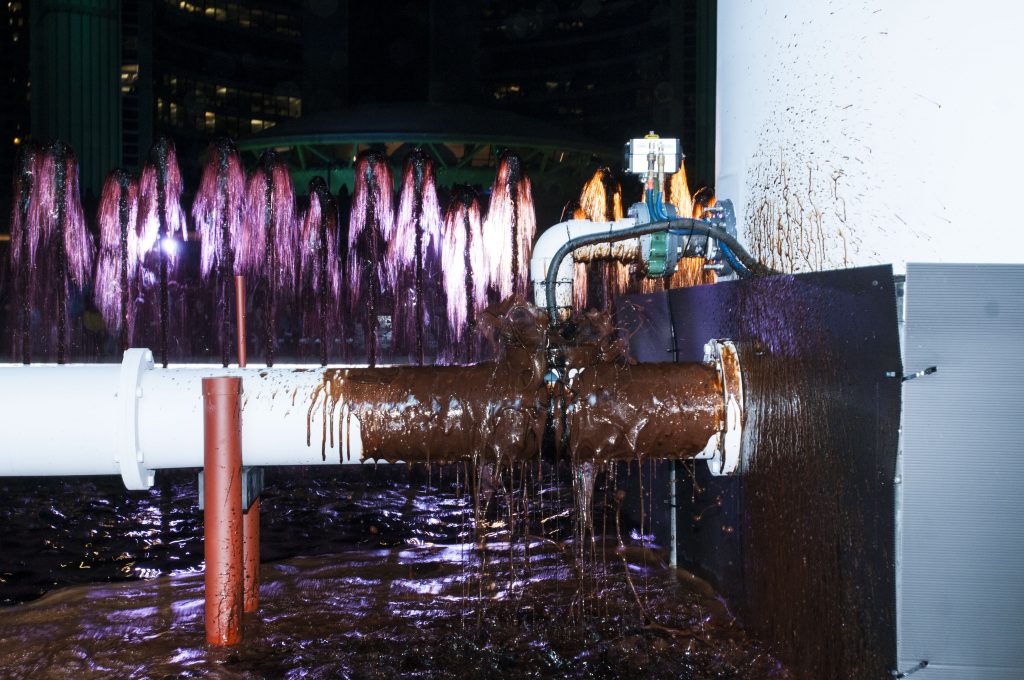 The counterargument begins when a pipeline bursts. 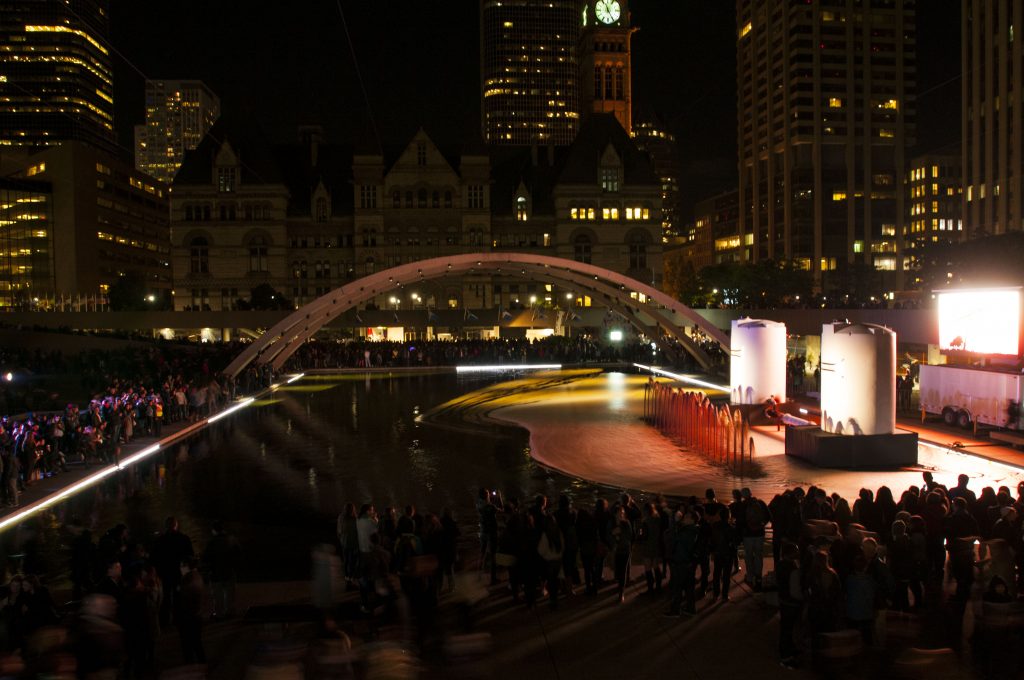 The fountain water is irredeemably fowled. 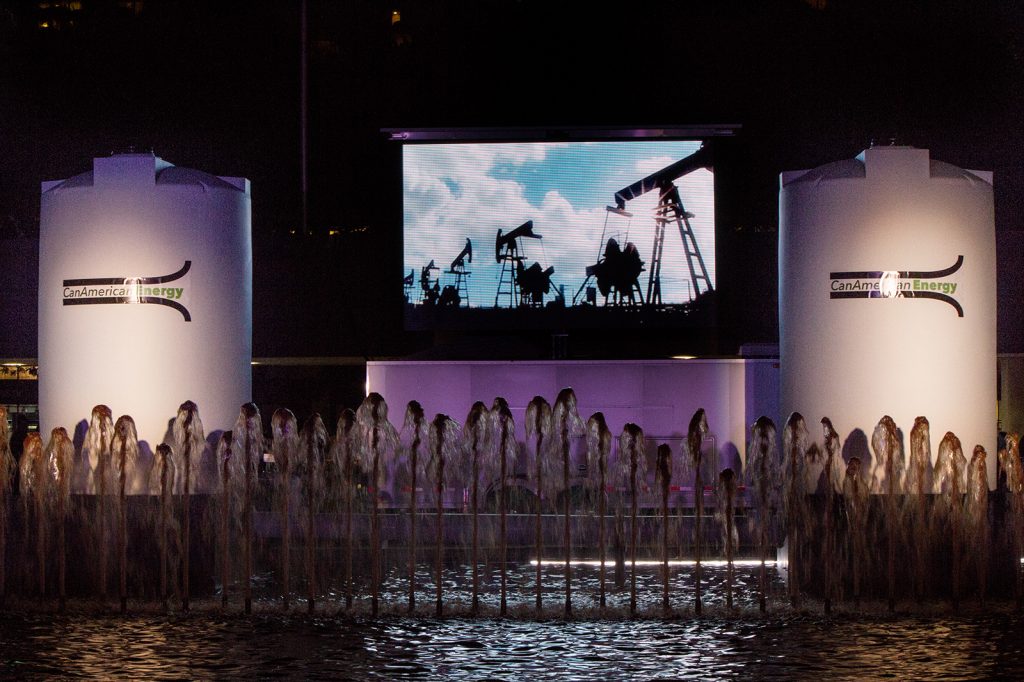 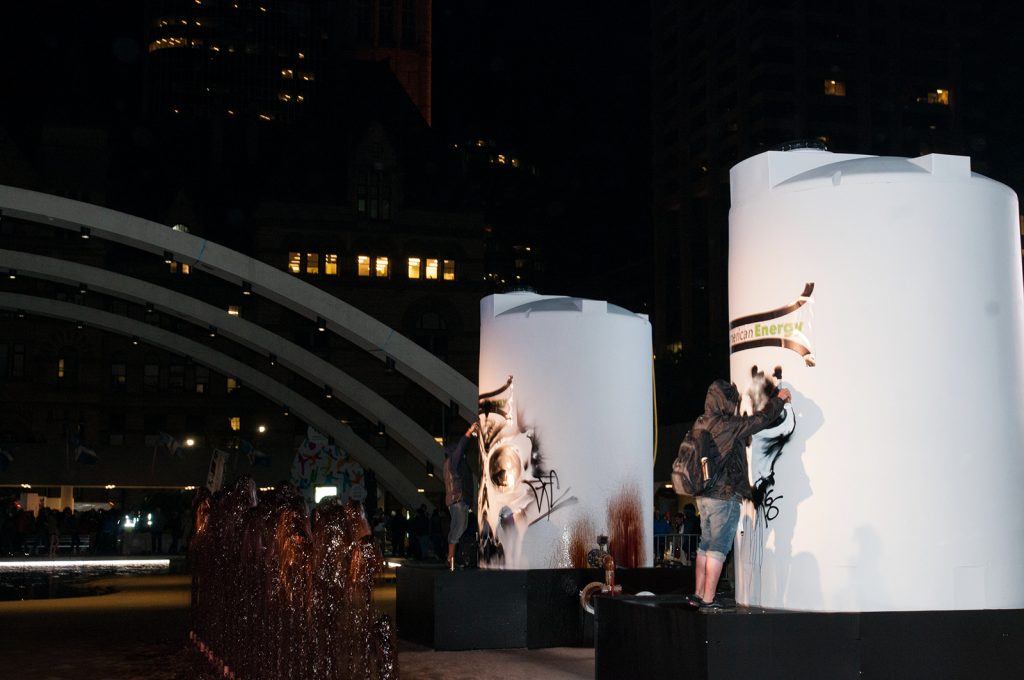 Taggers write their message to the corporation. 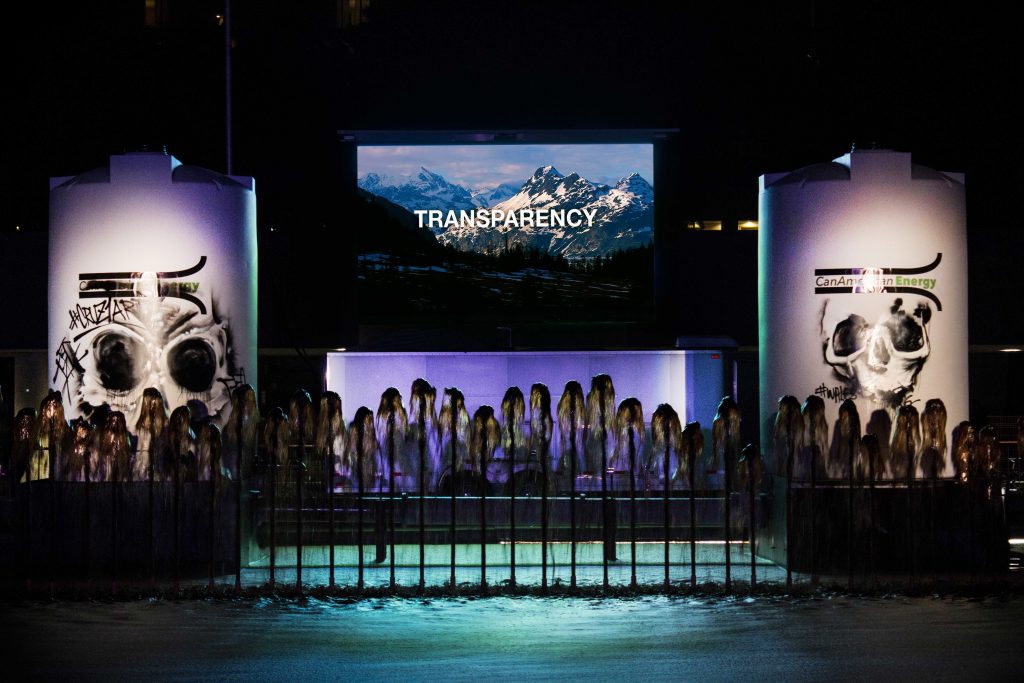 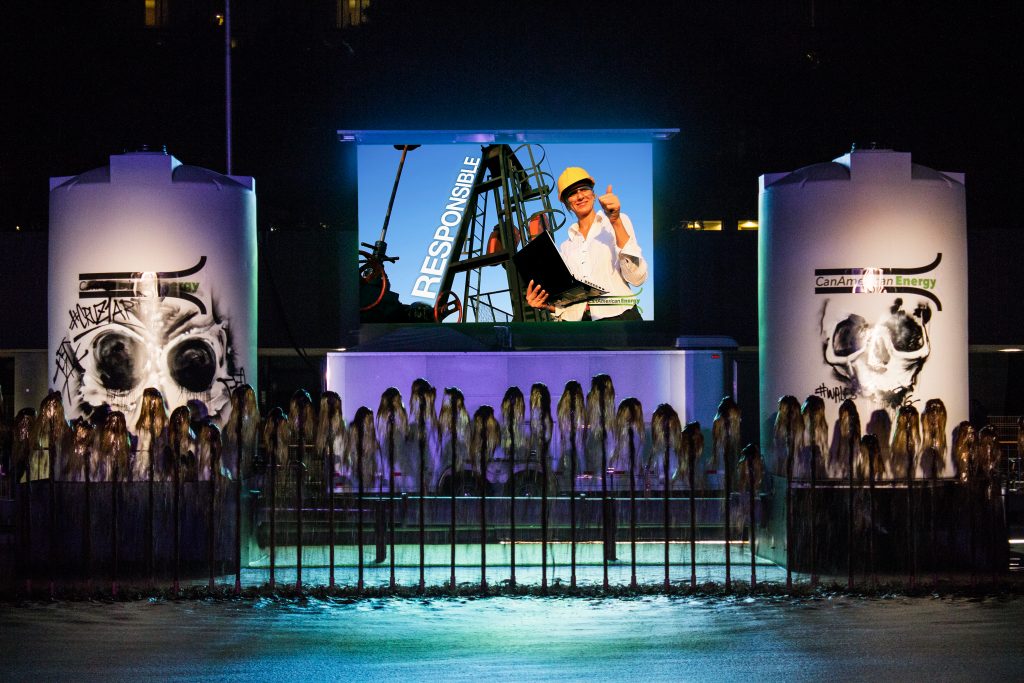 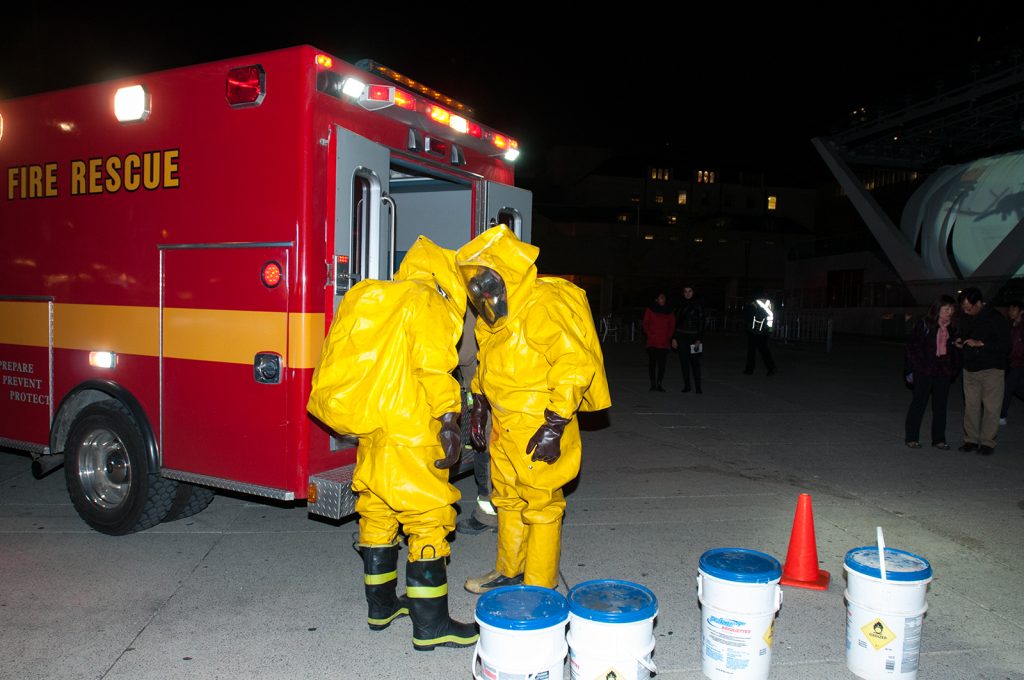 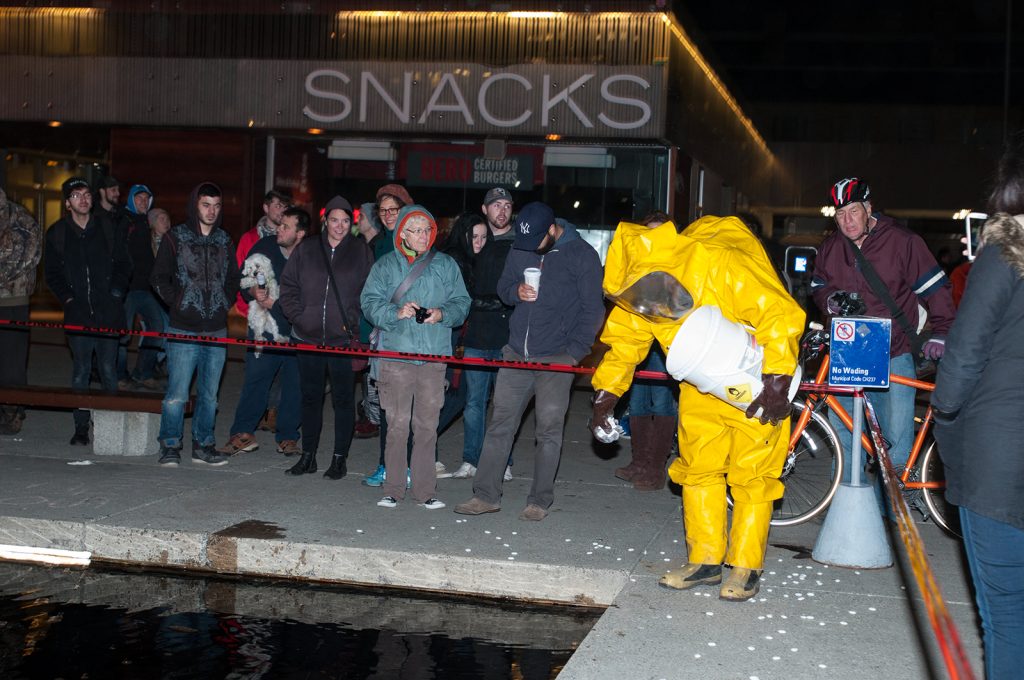